And Saturday's winner is....

Cancelled due to Covid-19

Please support us with a donation

A History of YAOS

Many articles have appeared in YAOS show programmes, giving valuable insight into the history and background of the Society. More recently, some historic newspaper cuttings have been discovered that add greatly to our fund of knowledge. So a number of gaps have now been filled and new details have emerged that I hope you will find enjoyable and interesting. The sources can be found in the Shows Archive section.

Wednesday 10th December 1902 was the date of the first public performance by the newly formed Yeovil Operatic Society. This was a concert in The Assembly Rooms at the Constitutional Club in Princes Street and was the culmination of a series of events performed by the self-styled 'Union Jack Concert Party' during Yeovil's Coronation Festivities for King Edward VII. The main feature of the evening was a production of the Gilbert & Sullivan comic operetta Trial by Jury. The Western Chronicle of Friday 12th December 1902 reported that the event was ‘quite a success, the musical and theatrical parts being a credit to the actors’!

According to the press cuttings, Mr W J Horrex was the person mainly responsible for the Society’s early success. As Stage Manager, it seems he was in fact responsible for everything that happened both on stage as well as behind the scenes, so he also fulfilled the role of producer. In addition, he was evidently a most accomplished actor & singer.

Mr Bert Moffat was the Business Manager, which in effect was also the position of Chairman and Secretary as well. He is credited with much of the financial success in arranging the shows and publicity. These were early days, so the distinctive roles and responsibilities that we are familiar with today had not yet had time to develop. 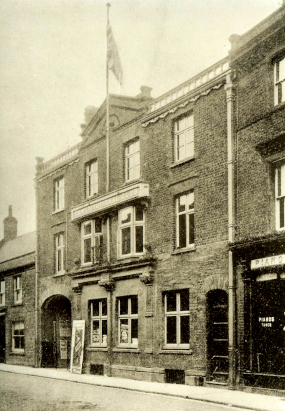 The Assembly Rooms were destined to become our regular venue and evidently well suited to our early repertoire of Gilbert & Sullivan operettas, which by all accounts proved to be extremely popular with Yeovil audiences of that time.

This was of course the era before microphones and electric stage lighting. Special mention is made about the 1903 production of Iolanthe that ‘Mr E M Seddon kindly made himself personally responsible for the limelight’. With an orchestra boasting 17 musicians – 7 violins, viola, basso, 2 flutes, 2 clarionettes, bassoon, cornet, drums and piano – the performers must have had strong voices to make themselves heard.

The size of the orchestra may have been the reason why we appealed for Guarantors to underwrite the cost of The Mikado in 1904 and a number of generous local citizens offered their promises to make up any deficiencies that might arise. Happily the attendances were good and these promises were not called in.

The Gondoliers in 1905 was notable because we had been rebranded ‘Yeovil Amateur Operatic Society’ and YAOS was now officially born. It was possibly no coincidence that this was also the year of our first President, The Right Hon Sir S C B Ponsonby Fane GCB. In fact, eagle-eyed readers of the time might have previously noted that Sir Spencer had ‘witnessed’ the previous year’s production of The Mikado (above), so he must have enjoyed the experience. YAOS is of course delighted that several generations of Ponsonby Fane have held this position, including our current President, Charles Clive-Ponsonby-Fane.

Contemporary newspaper reports have also revealed two anomalies in our historical records. Although previously recorded as being staged in 1908, we now know that HMS Pinafore was in fact performed in November 1907. Also, Dorothy was actually staged in 1909, not 1910 as previously recorded, being notable for the appearance on stage of a pack of foxhounds from the Cattistock Hunt – quite possibly the first such occasion (and probably the last) but proof that, even then, the YAOS influence had already extended into rural Dorset. 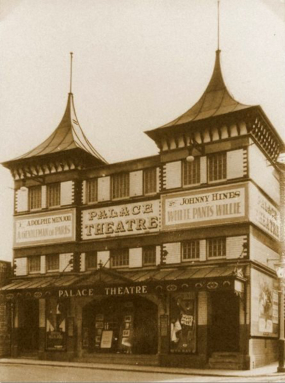 The 1921 production of The Pirates of Penzance marked the Society’s revival after a break of ten years following the Great War. This was also a landmark occasion because we had moved to a new venue, the Palace Theatre in The Triangle. This was Yeovil’s first purpose-built cinema and theatre, with a much larger stage and auditorium. The 1922 production of The Mikado ran to seven performances and broke all records at the theatre for both receipts and attendance. This is also the first show for which YAOS published a Souvenir Programme.

The period up to 1933 was considered to be the zenith of the Society’s achievements in the period between the wars. Immediately following the 1934 performance of Trial by Jury & The Pirates of Penzance, the Palace Theatre was redeveloped to make way for the new Gaumont on the same site. So for the 1935 production of Miss Hook of Holland we made a temporary move back to the Assembly Rooms, then called the Princes Theatre. 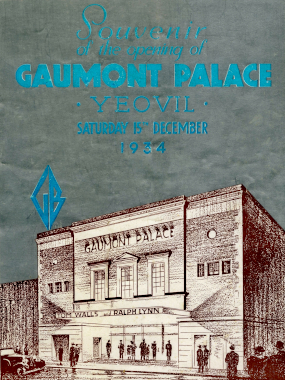 The 1936 production of The Mikado was at the impressive new Gaumont Palace Theatre, with its massive auditorium seating about 1,400 people – more than double the size of the current Octagon Theatre.

The next show was The Arcadians in 1938 (there was no production in 1937), which marked another first for YAOS and Yeovil – yes, a real live horse on the stage! And not only that, but the name of the society was changed to ‘Yeovil & District Amateur Operatic Society’.

Due to World War II, there was another interval of ten years before our next production. Sadly the Gaumont Palace Theatre was no longer available, nor the old Assembly Rooms, so YAOS was grateful to be offered the facilities at Summerleaze Park School for Merrie England, and this became our home from 1947 to 1950.

In 1951 we found ourselves back at the Assembly Rooms for Tom Jones and remained there up until 1972 with South Pacific (also memorable for the unscheduled power cuts). Then another temporary home was kindly given to us at Yeovil College, allowing us to stage our 1973 production of Merrie England, followed by Finian’s Rainbow in 1974. 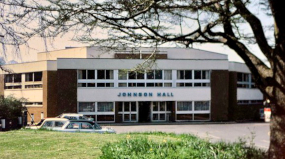 So at long last, after many years lobbying for a civic theatre large enough for full scale theatrical and musical performances - led by our then President Keith Johnson - the brand new Johnson Hall was completed and in February 1975 YAOS presented an extravagant production of My Fair Lady.

This was to set the tone for all our future productions and we also took the opportunity to stage two shows each year, which are normally in March and October. Initially the autumn shows were intended to be smaller-scale productions, typically Gilbert & Sullivan favourites, but as well known West End and Broadway shows became more available for amateur societies, we decided to broaden our horizons and in autumn 1989 we staged the smash-hit show The Merry Widow to an appreciative audience.

The Johnson Hall has since morphed into the Octagon Theatre and has been much improved over the years. YAOS remains extremely grateful to the management and staff of the theatre for their continuing support and professionalism. 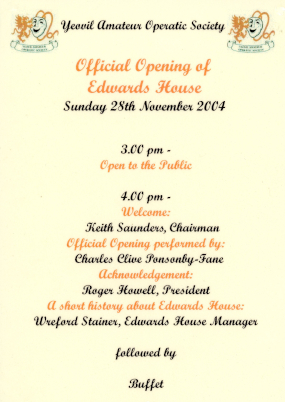 2004 was a major landmark year with the opening of Edwards House. For the first time we had our own headquarters building, with space for rehearsals, meetings, props and costumes. The purchase of this property was made possible by our most generous benefactors Olive & John Edwards, who had been lifelong supporters and members of YAOS. This turned out to be of fundamental importance to the Society, giving us the creative freedom to stage shows to a higher standard than was ever previously possible.

The roots of the Society lie deep in Yeovil and the surrounding area of Somerset and Dorset. Some families have been members since the very beginning, many have newly arrived; all have enjoyed the opportunity to perform before the footlights. A few who started with us in their youth have flourished into national stars on stage, film and television.

For more information about the many people who have contributed to the success of YAOS since its inception in 1902, please go to the Shows Archive section, where you will find links to individual show programmes, as well as a Summary of Shows, with dates, venues, directors, chairs and presidents.

PS We are always on the lookout for interesting artefacts from past shows – photos, tickets, press cuttings etc. In particular we are still searching for a copy of the souvenir programme for The Rose of Persia in 1931. If you can help us with any of these, or if you notice any errors or omissions in this History, please let us know through the Contact Us page. Thank you.